In any organization it’s the people that make a club successful and Selects FC has some incredible people involved in the club. Our army of dedicated volunteers ranges from parents, managers and our highly dedicated coaches.  These people are the backbone of our club and we are thankful to these people every season.

Our club also has dedicated and focused leadership. These people are dedicated to growing the club to it’s maximum potential and from what has happened in the past few seasons alone we are definitely full steam ahead! 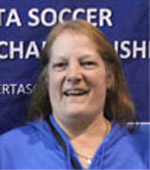 Diana started coaching in 1985 and joined MWSA in 1997 as U16 Male and Female director. Within two years she became the Head Age Director looking after all the Age Directors in MWSA.

In 2002-03 she became the Selects FC Director while still coaching in the Select Program. Her girls team qualified for provincials each season through up to U18.

She has helped grow the Select FC program over the years from 7 teams to 25 and still rising. Diana along with Nav Dhaliwal and Preston Ewasiuk started the highly successful U8 Junior Select program in MWSA.  The paramount success of this program has initiated other zones in EMSA to start thier own Junior program.

Diana is a dedicated individual that through the countless hours on various special committees in MWSA  and Selects FC continues to make a positive impact on soccer in Edmonton.

In addition to her role with MWSA and Selects FC, Diana recently took on the role of Premier Director for EMSA.  We are confident her dedicated leadership in EMSA will help build a fantastic competitive program throughout the city of Edmonton.